On Friday night I went to watch a floorball match, and during the time I am spending in Finland I try to play this sport, it is very interesting for me. Moreover, this sport is an important sport mainly in Finland.

That is why I decided to write my new article on that sport.

Floorball it is a sport which could be considered like a brother of Ice Hockey, but you don’t need ice to play, this game is an indoor team sport.

At the beginning in Nordic countries it was played during the summer in order to make another form of training for hockey’s players.

Like for the hockey you need a stick, however the puck is replaced by a ball. 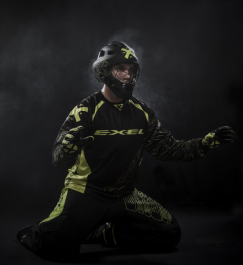 The goalkeeper is wearing limited protection, he does not use any stick. He has to protect the goal with his hands.

As I previously said I could practice this sport yet in Finland, we played at five players on the ground and one goalkeeper per team during three periods of twenty minutes. The contact between players is not rude as hockey but, this sport is still quite physical especially due to his speed.

As regards to the match I saw on last Friday it opposed the team « SPV » of Seinajoki to the « OLS » of Oulu. In this Picture you can see the « SPV » in red and the « OLS » in yellow.

That was a very attractive match. During this match, I could see a real comfort front the players to control the ball with their stick, I saw some incredible tricks.

The SPV won the match 13 to 8, which permit the Seinajoki team to consolidate his second place of the raking of this year just behind the « Happe » of Jyvaskyla.